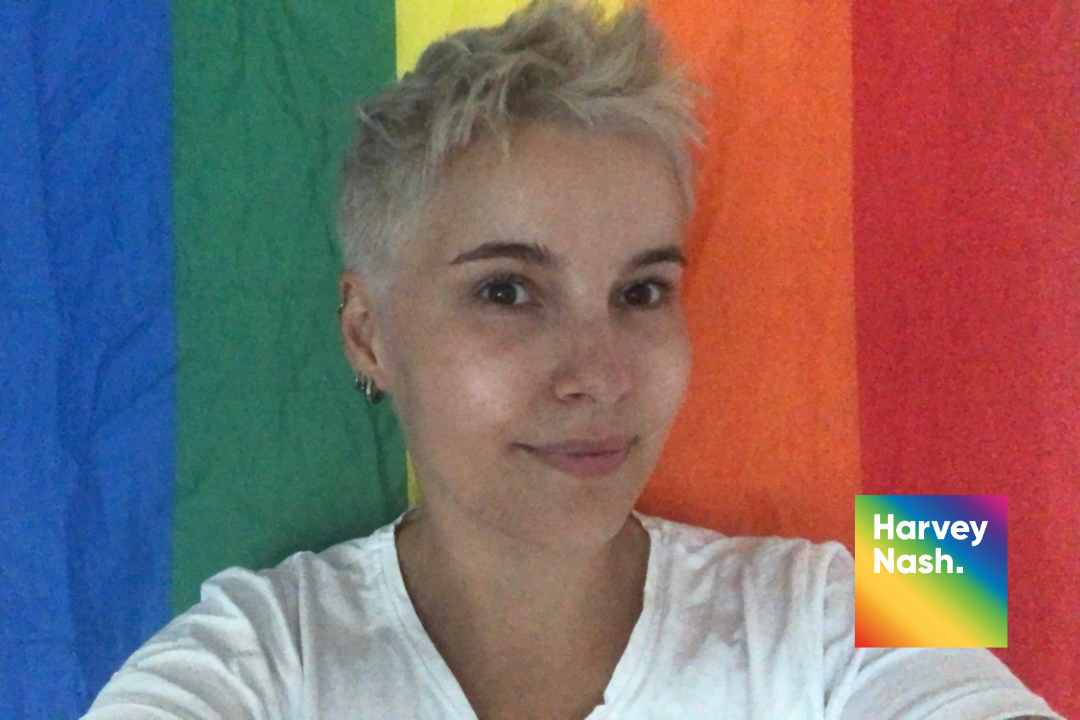 To celebrate Pride Month, Harvey Nash shone the spotlight on some of our LGBTQIA+ employees, Marta Matejczyk from our Harvey Nash Germany office sat down with David Savage to discuss her coming out as bisexual, the effect it had on her relationship with her family, and how businesses can support the whole LGBTQIA+ community.

David: Marta, tell us a little bit about who you are, how old are. That feels intrusive already. But where you're from and what you do for the business.

Marta: So first of all, this is an interview about my sexuality and my sexual orientation, so I don't think a question about my age is extremely intrusive.

Marta: Well, I'm 27 and I am from Poland, originally I come from Poland. I live in Germany now for over three years. So it is quite interesting also for me to see how extremely different these two cultures react to and handle LGBTQ people. And I'm sure that's not a surprise for you, but it's much better here in Germany. I am a salesperson. So I work with different accounts with different clients and I make sure they get the best people that they can from us.

David: When did you first realize that you're bisexual? I'm assuming it's something that you've probably always known, but perhaps you were confused for a while or-

Marta:  No, that is something that a lot of bisexual people I'm sure will tell you this, that sometimes I feel like I still don't know because there were these moments in my life where I thought I was definitely a lesbian or when I thought I was straight and it's all very chaotic.

For a couple of years I dated girls, I dated boys and I was like, "I'm not going to use any labels for myself. And only around I think, when I was 20, 21, I was like, "I'm clearly bisexual". So I've identified as bisexual for around seven, eight years, and, I'm not going lie to you, there were like short moments in there when I was like, "Maybe I am a lesbian. Like, I haven't been attracted to any men for the last two months, or maybe I am straight and it's all been a huge lie or something."

David: We're in Pride Month for the minute. How do you celebrate pride and what does it mean to you?

Marta: So the whole concept of pride, what it means to me, it has changed so drastically in the last couple of years because in Poland we don't have pride parades, we have something that's called an equality parade, which I think it just shows beautifully that we're not even at that stage yet where we say, "We're proud, we're loud." "We're here, we're queer." We're still at that, "Please, we're your equals, give us some rights." Kind of in that moment in history. My first equality parade, it was 2009, I think, 2010. And it was quite scary. It was a little bit traumatic as well because we were only a couple of 100 people and there were hate groups shouting, calling us perverts and all that stuff. But I continued going every year and I could see the numbers grow every single year.

Pride is extremely important to me, especially for many bisexuals, I think, but also myself. Sometimes you don't feel like you're queer enough, you feel like you don't deserve to be the part of the community because I am dating a man at the moment and sometimes I do have these thoughts, this imposter syndrome, this little voice in my head telling me, "You're not really a queer person. You're just impersonating, you're just pretending, and you don't deserve to be here." And it's incredible to be able to feel like a part of a community and to be able to feel like this is my month, this is my time.

David:  One of the most difficult challenges for any LGBTQIA+ youth is the question of family acceptance. So what's your coming out story?

Marta:  Well, there was not really much coming out for me. It's quite funny because in my family,

we never really talked about sexuality and stuff like that. I came out to my sisters in the easiest way possible. I just told them when I got my first girlfriend, I was telling them about this girl I date and they didn't ask me any questions. They were just like, "Oh, that's cool. What's her name? What's she like?" They didn't know at the time if I was bi or if I was a lesbian, and I didn't put it into words as well, because I didn't know at the time either. So I was just very open with them because they're my friends as well.

Then when it comes to my mom, my coming out story is a little bit silly because around eight years ago, we were playing a Facebook quiz, where you answer questions about your friend and then the friend answers the same question. And if you both answered the same way and the screen turns green and yay, you´re real friends.

My mom got a question. What is your friend's sexual orientation? And I clicked on bisexual without thinking, and my mom clicked on straight, obviously because she thought I was straight. Immediately, the screen turns red and it's like, "No, wrong. She's actually bisexual.

And we've never talked about this. This topic has never come up afterwards. But ever since then, my mom always puts up a rainbow flag out the window during pride month and I can see her sharing on Facebook, all these interesting articles about the LGBTQ community. Also, she follows me on Instagram now, so she sees all the crazy stuff I post about my sexuality. I know she knows, and I know she supports as well.

David: You talked earlier about Freddie Mercury coming out as his bi and then being put back in the gay box, or someone like Angelina Jolie or making Megan Fox who are put back in the closet.

David: Obviously it's not easy as well for anybody to come out to their families. We've discussed they may not get the same level of support that you've had. So what would you suggest to people who are scared? They've seen the way that people are treated when they do come out and how it can be misconstrued. What would you say to give them confidence that they can come out of the closet and it be a positive experience?

But again, if you do decide to come out of the closet, it is a great experience. Well, first of all, you have to prepare yourself for coming out of the closet for the rest of your life because this is not a TV show. Unfortunately, you don't just come out once and that's it for the rest of your life. You will have to be coming out every time you are in a new group of friends, or you work in a new company especially when you are gender non-conforming or bisexual, or any of these things that make people around you not know who you are immediately when they see you. Be prepared to do that. But also, trust me, living as your true self and just putting your identity on a flag and waving it around, it's an amazing feeling and it's very liberating, you will not regret coming out!

David: Look, I think it's been an absolute joy to speak to you as part of the Pride celebrations. I really appreciate you being so open and sharing so many of your experiences. And I hope there's some useful advice in there for anyone who wants to be an ally, anyone who's part of the community and maybe doesn't feel as supported. Marta, really thank you for your time.

Marta: Thank you very much, David.

Listen to the whole Interview here:

Where are all the technologists? Talent shortages and what to do about them?