Distil your vision into a simple message that everyone can get behind – people like to understand they aren’t just doing hard things, they are actually heading somewhere. 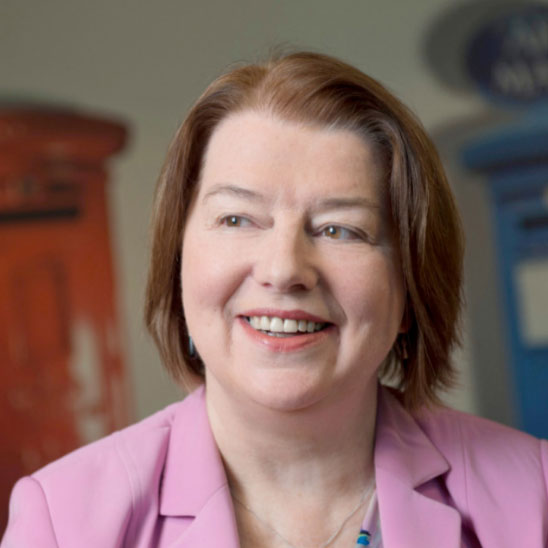 There were massive challenges to overcome, including a £31 billion pension deficit, and a single entity Post Office and Royal Mail which sat within a regulatory structure that was hugely uncompetitive and prohibitive to change.

Catherine joined Royal Mail in 2011 with the remit to transform the technology side of the business, which had many years of under-investment in both infrastructure and people to contend with.

It was a highly complex challenge and Catherine created a vision and strategy called the Get Safe Programme, aligned to the huge change programme being rolled out across the organisation.

This enabled the city and analysts to have a greater understanding of how change could be achieved. There were several key elements to the programme that had to be addressed concurrently:

Catherine attributes her success to the original core staff, who really rose to the challenge. They worked with her to create an innovative strategy to attract a huge array of different people. Catherine has been very successful in attracting women into this traditionally very male environment and 31% of the team are female.

This was done through a targeted approach and also ensuring that language in adverts was gender neutral. Embedded YouTube links allowed prospective staff to see real people talking about what it was like to work at Royal Mail.

The team were very careful to avoid recruitment fatigue by focusing on each role rather than a blanket approach. Their success speaks for itself.

The team has grown from 120 to over 500, managing 33,000 applications in the process. Over the last 12 months Catherine has focused on ensuring the right culture is created and continues to evolve in the right direction.

She has created ‘culture crews’ in each location, who meet regularly to discuss how to attract the right people and ensure everyone commits to shaping their working environment using 31 identified good practices and assessing the values on a regular basis.

One example of this is getting everyone to commit to one simple thing each month, such as saying hello to someone he or she doesn’t know. Royal Mail also encourage third party organisations they work with to adopt the same practices.

Catherine encourages the groups to have fun. She believes it is vital that individuals enjoy and understand their role, and have some laughter during the working day.